The Chelsea boot is an autumn-winter 2013 gem! The great
thing about this footwear trend is that there are many different Chelsea boot
styles to choose from – so you can work the look to suit your style and budget.
Here’s a look at five of the current Chelsea boot options: 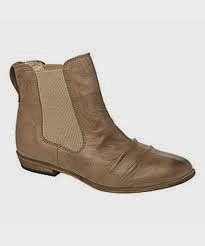 Celebrate the traditional, and historic, design of the
classic Chelsea boot. This ankle boot design was originally invented in the
Victorian Era when Queen Victoria’s boot maker came up with a shoe that busy
men and women could easily slip on and off. It was revolutionary due to its
elastic panelled side, a feature that still remains key to the boot today. Traditional
Chelsea boots are produced from black or brown suede or leather, with a
low-mid heel. A unisex design, the classic Chelsea boot wouldn’t look out of
place in a male or female wardrobe. 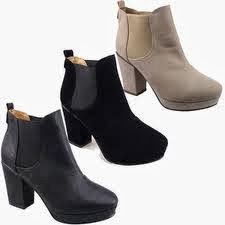 The heeled Chelsea boot is definitely one to look out for
this season, providing a glamorous twist on the traditional design, it’s going
to be on the feet of many Christmas and New Year party gal! The heeled Chelsea
is again mostly seen in black suede or leather, but can feature edgy addition
details such as straps, buckles, chains and studs. There some nice fusions
between Chelsea boot and biker boot currently on the high street.

If you’re not a fan of high heels, but do appreciate a bit
of added height, wedge heel Chelsea boots are another nice option. Moving away
from the traditional Chelsea boot, the wedge design typically has a lower cut
ankle fit and at the moment dark red and other autumnal shades are popular. 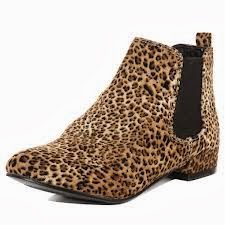 Fancy something a bit more quirky? Animal print in general
is seeing a revival this season, and so it’s no surprise it’s found its way
onto Chelsea boots.  Leopard print and
snake skin effects are the common finish for the animal print style Chelsea,
often teamed with a heel too just to add to the drama. 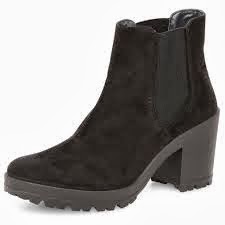 Whilst Chelsea boots are traditionally sophisticated and
plain, this
year they’ve been given a modern twist with the ‘chunky’ style.
These chunky Chelsea boots thick tractor soles, buckles, high ankle cuts and
usually a buckle or two as well.

Finally, the most glamorous type of Chelsea boot currently
on the market – the cut-out. This plays on the recent trend of 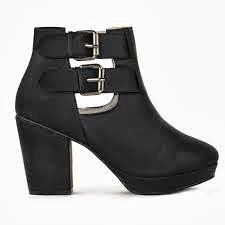 having cut-out
portions of material on dresses and tops. However, with the Chelsea boot, the
‘cut-out’ element is actually recreated through the clever placement of buckles
and straps, providing a sandal-boot effect. This unusual form of Chelsea boot
has a modern-gothic feel and will make a real style statement. Show off a bit
of foot flesh or team with patterned tights or a printed sock. Perhaps not the
most practical choice in wet weather, it’s certainly not the Chelsea boot of
choice if you intend to go riding (as many of the Victorian wearers frequently
did).