When a customer frequently users a provide, I think it is fair to say that a relationship is formed. But as you learn in life, some relationships are toxic and then it is time to cut the cord and end it.

I have been flying easyJet for at least 10 years, mainly going back and forth from Malaga and Gatwick to visit my granddad and then to the villa once he was gone. So when Hubs and I went to Amsterdam booking with easyJet was obvious.

Our flight was due to leave Gatwick at 14:25 on 25th July 2014, unfortunately we didn’t board until about 3pm. This was due to someone falling ill on the flight before and needing medical assistance, which is fair enough. I’m a reasonable person, this is unavoidable and what is a 30 minute delay really?

However, after boarding we were stuck on the plane with no information for about 45 minutes before the pilot told us there was a “technical issue” and we would be heading back to the terminal.

Once we got there the police boarded to remove a bunch of “disruptive” passengers; a group of men on a stage do who played Jolene by Dolly Parton on loudspeaker and another song. I cannot say for sure if this was the reason they were ejected, easyJet will only say the reason the flight was delayed was because of disruptive passengers. This is considered to be out of their control and therefore they are no liable to pay compensation.

Once the passengers were removed we then waited inside the plane for a further 90 minutes, with no offer of food or drink, while the police finished their paperwork and the captain re-submitted the flight plan. We were then told we would have to wait on the plane for a further hour and half before we could take off. Although, luckily we only had to wait 30 minutes.

During this two hour plus waiting period we were hardly explained anything (the pilot jovially explained how this was his first time calling the police to remove passengers), offered no drinks or food, or reassured about the situation.

When we did finally take off, we were finally offered a complimentary drink and snack. As we were sat in the middle of the plane and the trolleys started at either end, nearly all the stock had already been chosen and there were no suitable snack left. This meant that my Hubs and I received an apology for the delay in the form of a 500ml bottle of still water and a can of diet 7UP.

Also by this point the staff were less than interested in us and were busy laughing and joking with each other about the men they had removed, completely nonplussed about the inconvenience we were all caused.

We were only going to Amsterdam for the weekend as a press trip for the blog, which meant we had a very full itinerary. As a result of our overall 3 hour delay, we were unable to make it to the Tourist office to pick up our press passes and iAmsterdam cards on Friday, which meant that we missed our appointment at the Anne Frank Museum and then had to skip the Van Gogh Museum because the queue was too long and we didn’t have enough time before it closed.

Additionally we had to buy tickets for public transport on the Saturday morning and for a Taxi on Friday night as we had not been given our iAmsterdam card – which entitles us to free public transport and we could not find anywhere to purchase a GVB ticket.

Once I returned home I wrote a complaint to easyJet customer service department via email. I was sent an automated response that I would get a reply in 7-10 days. Considering the size of the company and their operation I think that is a reasonable amount of time. However, after 11 days I am yet to get a response to my email.

Hubs and I are going to Marbella in September, and before I booked our flights, I wanted to give easyJet the chance to rectify the situation, so I approached them on Twitter asking how to get my issue resolved. They politely asked me if I had sent it to the customer service email address.

After that I decided the next approach was Facebook. I DM’d the page and left a comment, after 2-3 hours I finally had a response. See below. 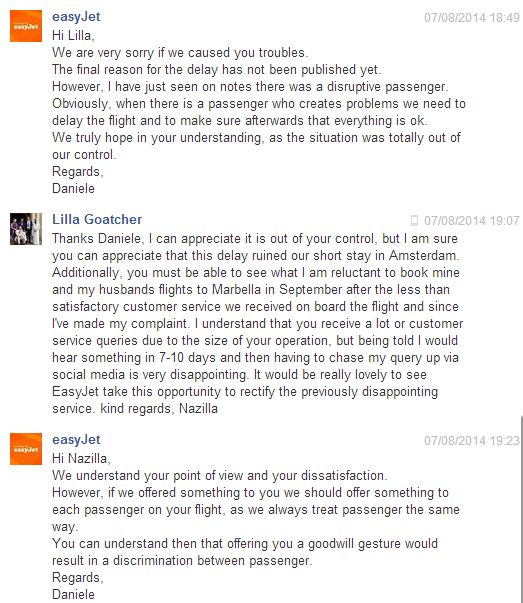 As you can see easyJet were unwilling to even try to rectify the awful service we received. Apparently my custom is not at all important to them and my time is only worth can of Diet 7UP which I can pick up in my corner shop for 65p. If anything there response is an insult.

After this conversation I tweeted about my dissatisfaction and was followed by easyJet who asked me to DM them my issue so they could looking into it. I declined their offer with the following response and heard nothing back. 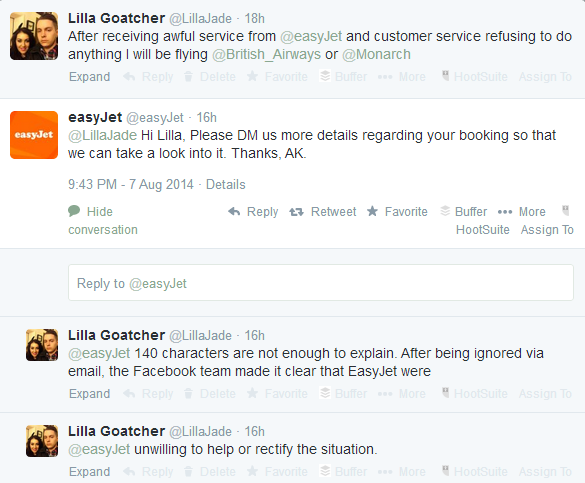 Whether the delay was easyJets fault or not I don’t think that a 50 minute flight turning into close to 4 hours on a plane is at all acceptable, we may have paid easyJet prices – but the flights still cost over 10% of my monthly wage and to be honest easyJet is not actually that cheap any more (had I flown with another provider the flights would have cost £20 more).

So here I am ending my relationship with easyJet. I am no longer going to put up with a one way relationship, one where you take my money and deliver an embarrassingly disappointing service. I will no longer be looked down on by your less then friendly staff in vile orange and I will not be forcing myself into your ridiculously small seats with my knees firmly digging into the seat in front of me.

Hubs and I will be flying BA or Monarch in September.

Have you ever experienced awful customer service?