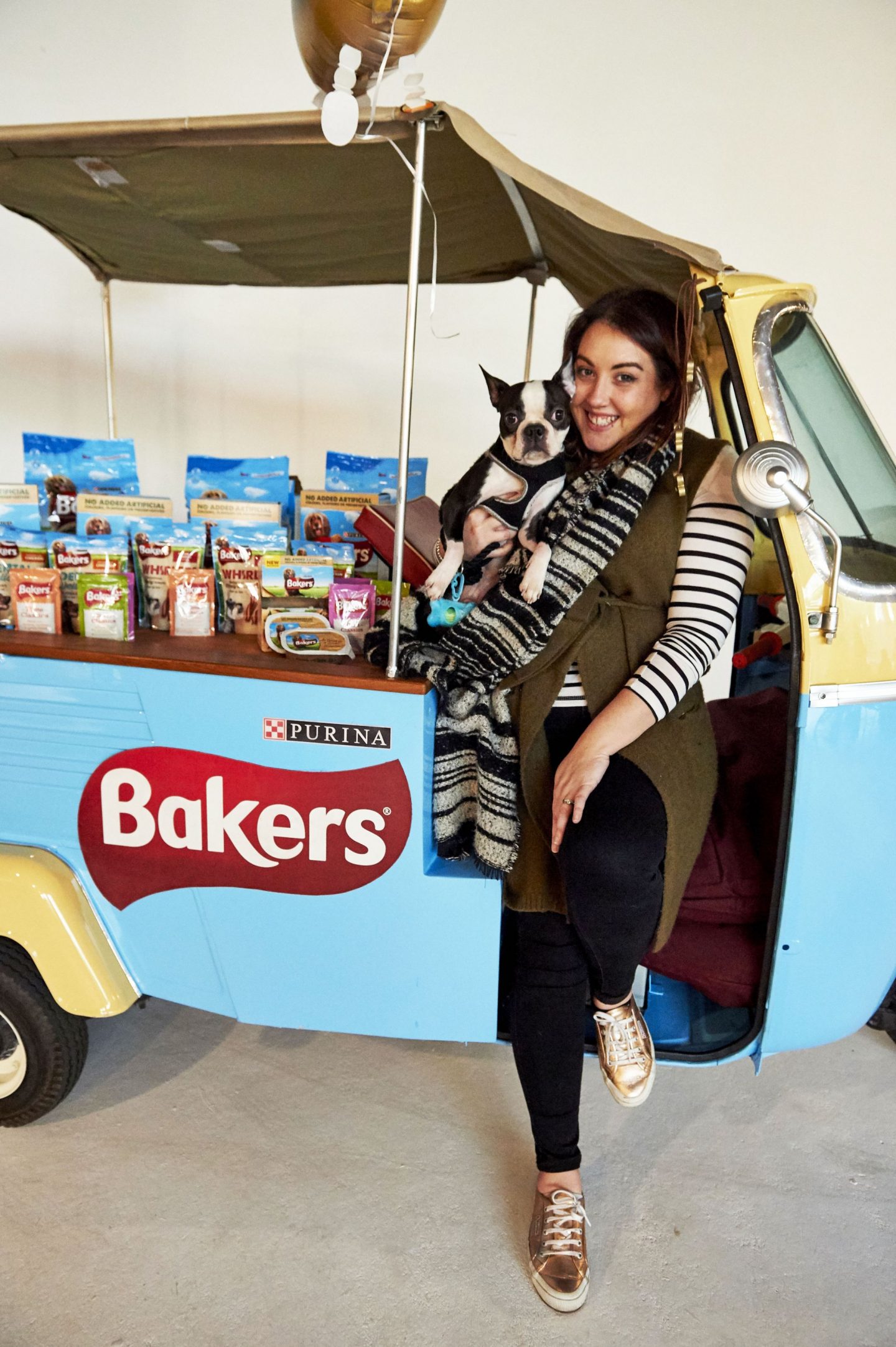 Over a year has pasesd, and I’ve still not formally introduced you to Bruno. Well, Bakers have now given me the perfect excuse to introduce you, as well as some adorable pictures. 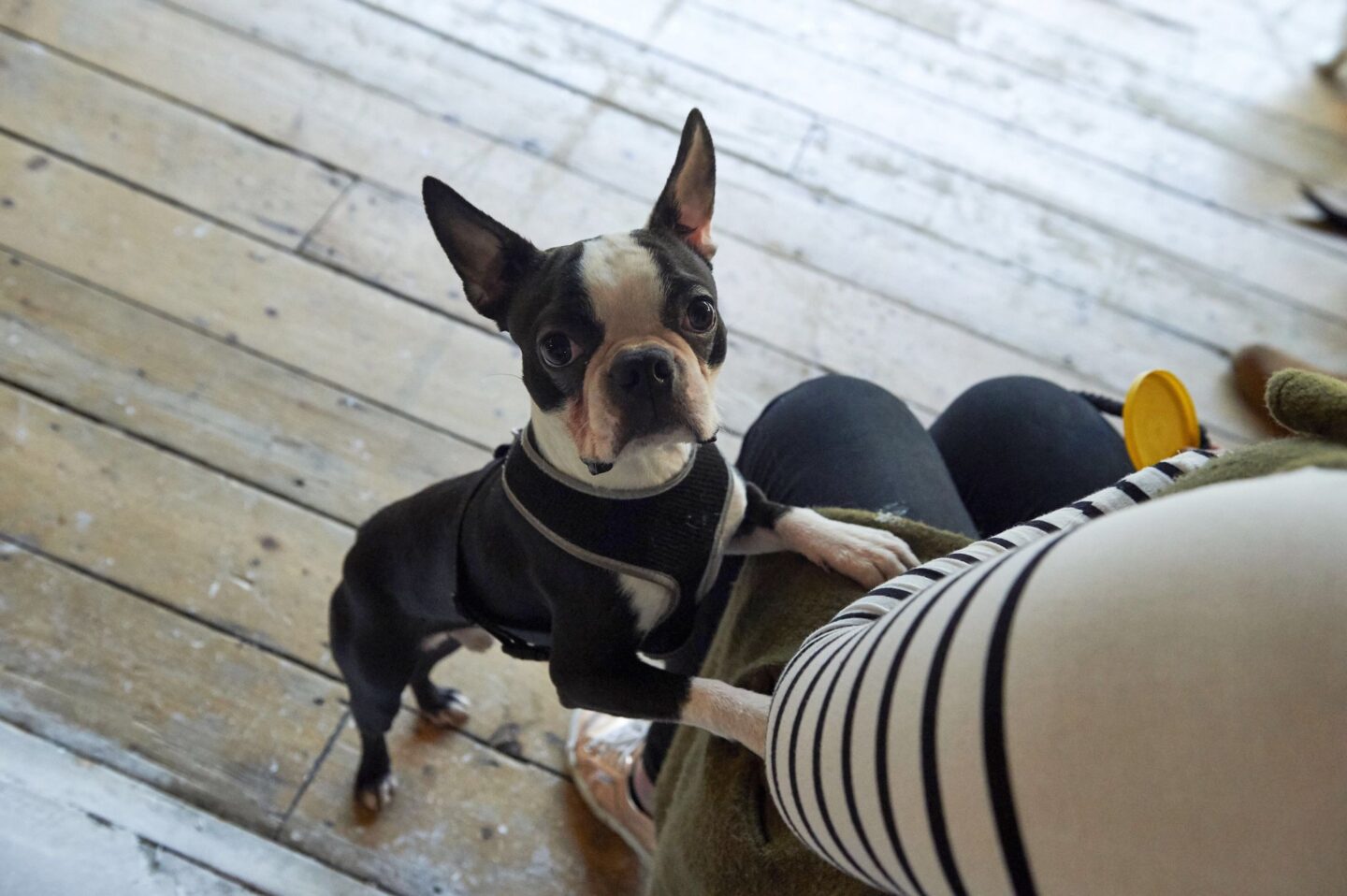 Now, I have to admit that I’m a real food snob when it comes to my pets. However, I was a lot more versed in feline nutrition, having spent a lot of time researching it for Sega. What I learnt, was that there was not a lot of protein in standard cat food. It’s also packed with artificial ingredients.

Stupidly, I took what I had learnt, and thought that similar would apply to dogs. After expressing that there was zero chance that my precious Boston Terrier, Bruno, would EVER eat Bakers, they decided to invite us up to see if they could change my mind.

This would be Bruno’s first trip to London. He’s been on the train before, but not for longer than five minutes. We were travelling during the morning commute, so I was a bit worried. Luckily both journeys were fine. Bruno spent the way up watching the world go by as we raced along, finally falling asleep. On the way back, despite making sure he was watered before we got on the train, he started to get very restless on the train back. But he also made multiple friends on the train, that made him relax.

Behind the scene with Bakers

When we arrived we were split into two groups to take turns in talking about dog nutrition and health. Our group started off talking nutrition with a lovely lady called Libby, who is an in-house Vet for Bakers.

She gave us a quick history of Bakers. Founded in 1922, Bakers, is actually made by Nestlé Purina (Whaaaaaaaaattt????). Purina are known for their quality and safety standards.

Being owned by Purina means that the Bakers recipe has been formulated using research from Purina’s nutritional experts and scientists. They’ve worked with over 500 nutrition and pet care experts globally. Bakers is also manufactured in the UK and 80% of its ingredients are sourced here too. 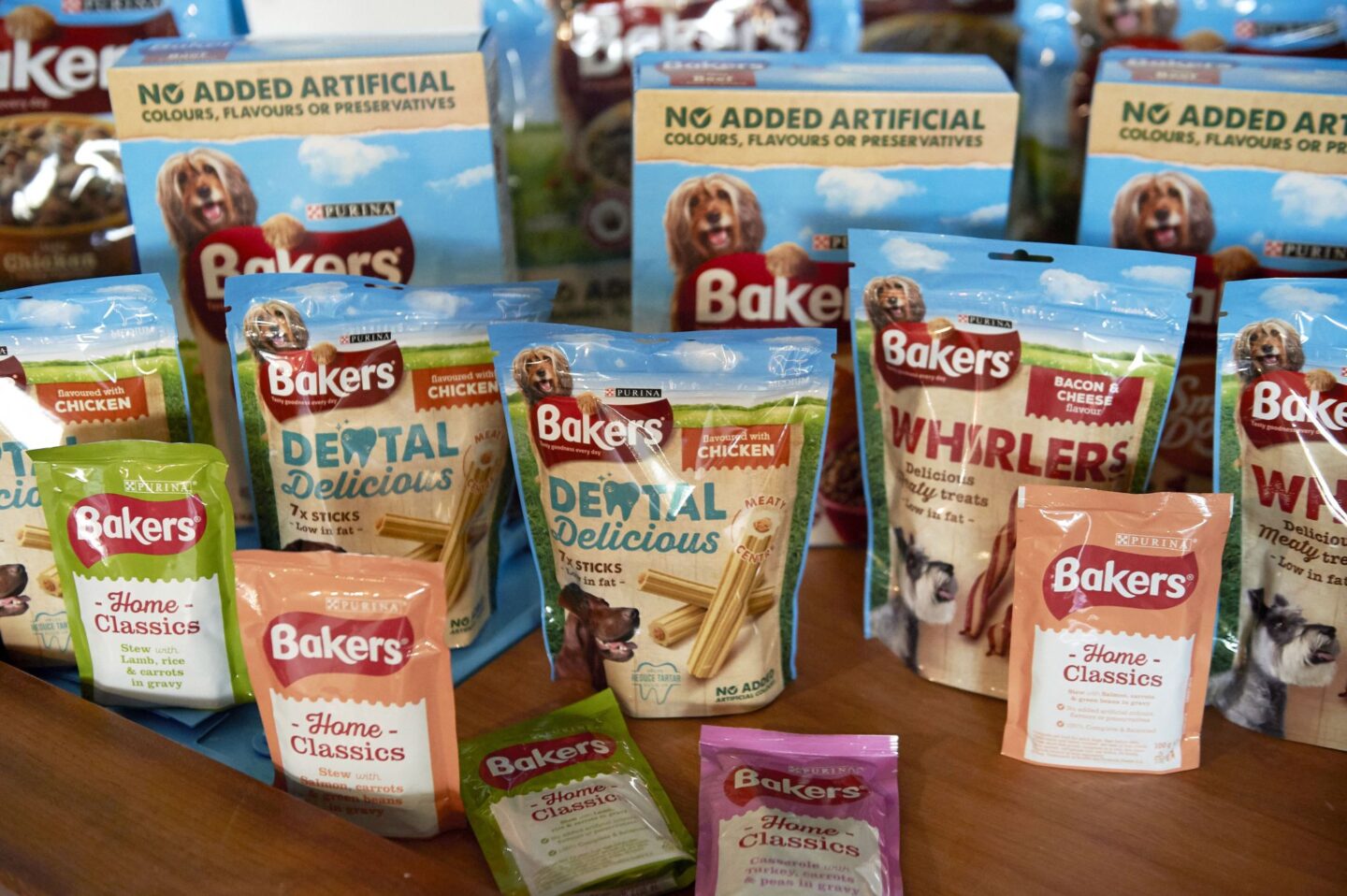 Libby then shared with us what actually goes into Bakers, and what these ingredients do. She explained to us how Bakers is a nutritious, high-quality food. It’s 100% complete and balanced – meaning it contains the right balance of the five major nutrient groups: proteins, fats and oils, minerals, vitamins, and carbohydrates to help keep a dog in good condition. This includes the right levels of over 30 essential nutrients, in a form that dogs can easily absorb and use.

I was surprised to know that Bakers complete contains 21% protein which is more than the average found in other pet food products. This protein comes from meat, corn and wheat sources. It also contains 30% meat and animal derivatives. 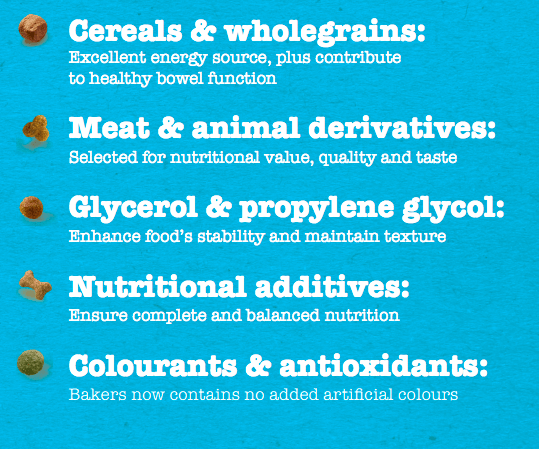 I quickly realised how easily influenced by the Boston Terrier Facebook groups I was. I’d become paranoid that Bruno needed a grain free diet, because his fur looked thinner. But after speaking to Libby about my concerns, she assured me that this was just natural shedding.

Next up we were in the capable hands of Lucy,a Vet. Nurse at Bakers. She talked us through dog body condition, and how to tell if your dog is a healthy weight. I actually found this really reassuring, because I always thought Bruno was a bit small because you see the end of his ribs, but she said he’s perfect.

We then started the poo talk. This is something I was quite eager to learn about as Bruno often has quiet loose stools. We looked at the Fecal Scoring Chart, and I realised that he seems to have healthy poo in the morning and not so great in the evening. Lucy reassured me and said that maybe his diet was to rich, or that he may actually NEED grain or a probiotic to help regulate his bowel movements. This could also help with his killer wind situation.

After a bit of lunch for the dog mummies, and some running around and fresh air for our pups, we had the fantastic opportunity of working with Dog trainer Sandra Strong who has trained many famous dogs for the TV and film industry.

We started to train Bruno as a pup, so he knows the basics and is used to click training. Click training is when you train your dog to expect a treat when they hear you click. You then associate the click with a particular action and a command to encourage your dog to learn what you’re asking them to do.

We started off really simply with the command ‘Touch’. This comes in useful if you want them to pose with their paw on something (Such as his personalised bowl that Bakers had made for him). We started off with an old plastic lid and everytime Bruno would show any interest in it I would click and reward him. Then slowly I encouraged him to touch the lid with his paw, and then started using the command. After a while he understood what ‘Touch’ meant. You can then use the lid to train them to touch other things.

Next up, we tried to train them to use a skateboard. Bruno is used to skateboards, so he wasn’t  interested in sniffing it like the other dogs. We started by treating Bruno whenever he interacted with it. In theory, eventually they will stand on it. But, by this point I think Bruno was starting to feel a bit tired and overwhelmed by his exciting adventure, which was perfect as it was home time. Joe is very keen to continue the Skateboard training. 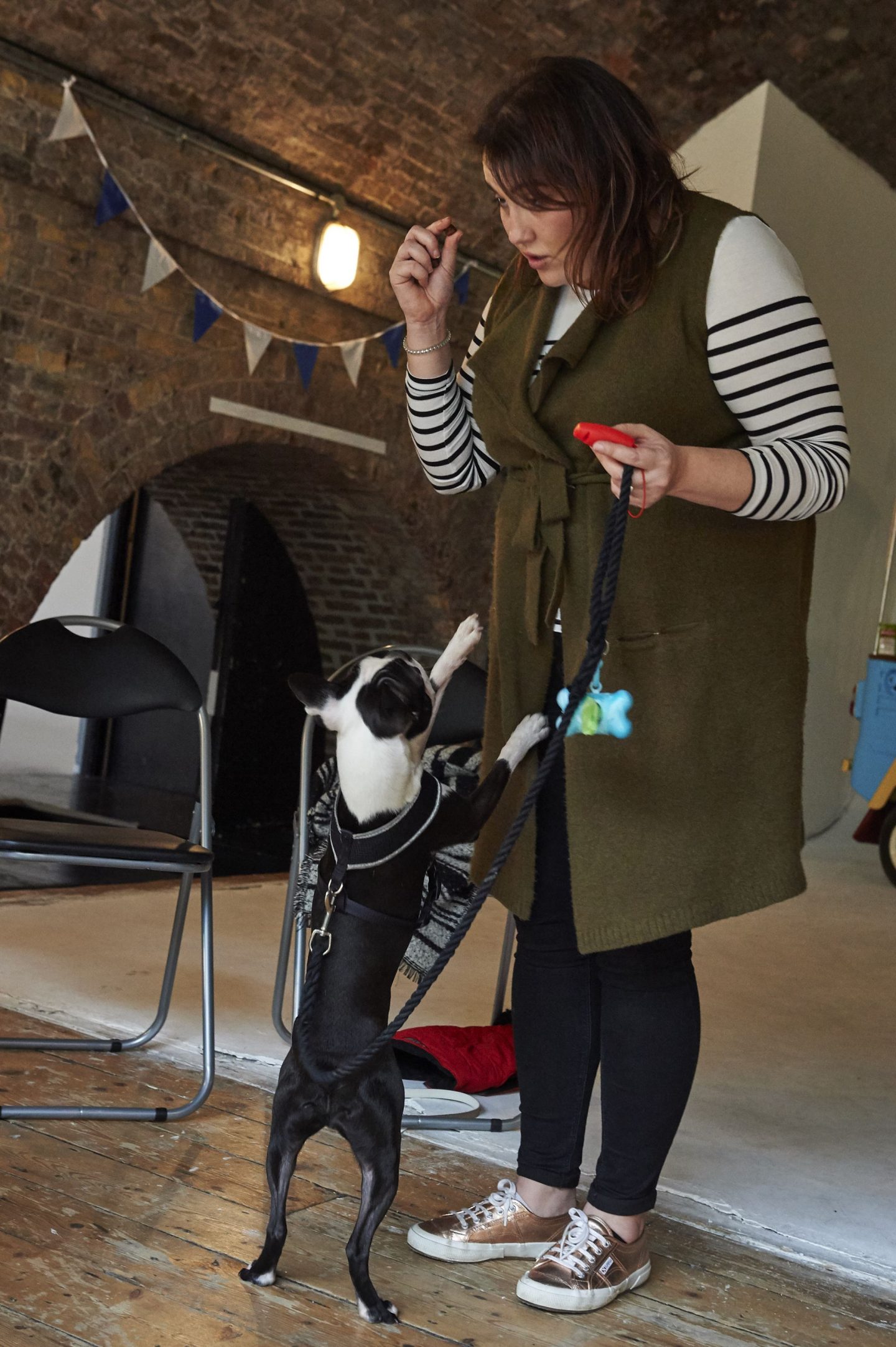 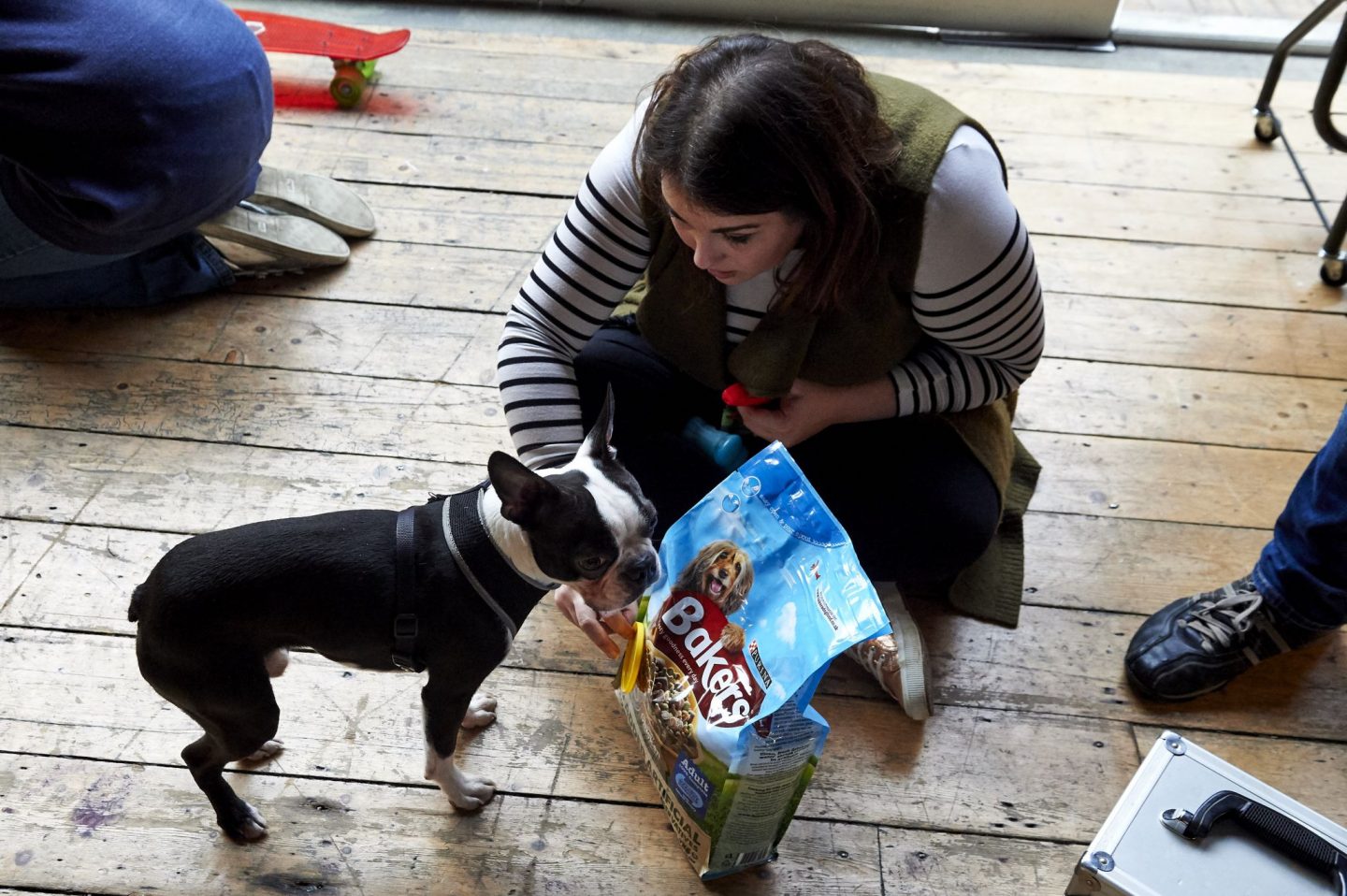 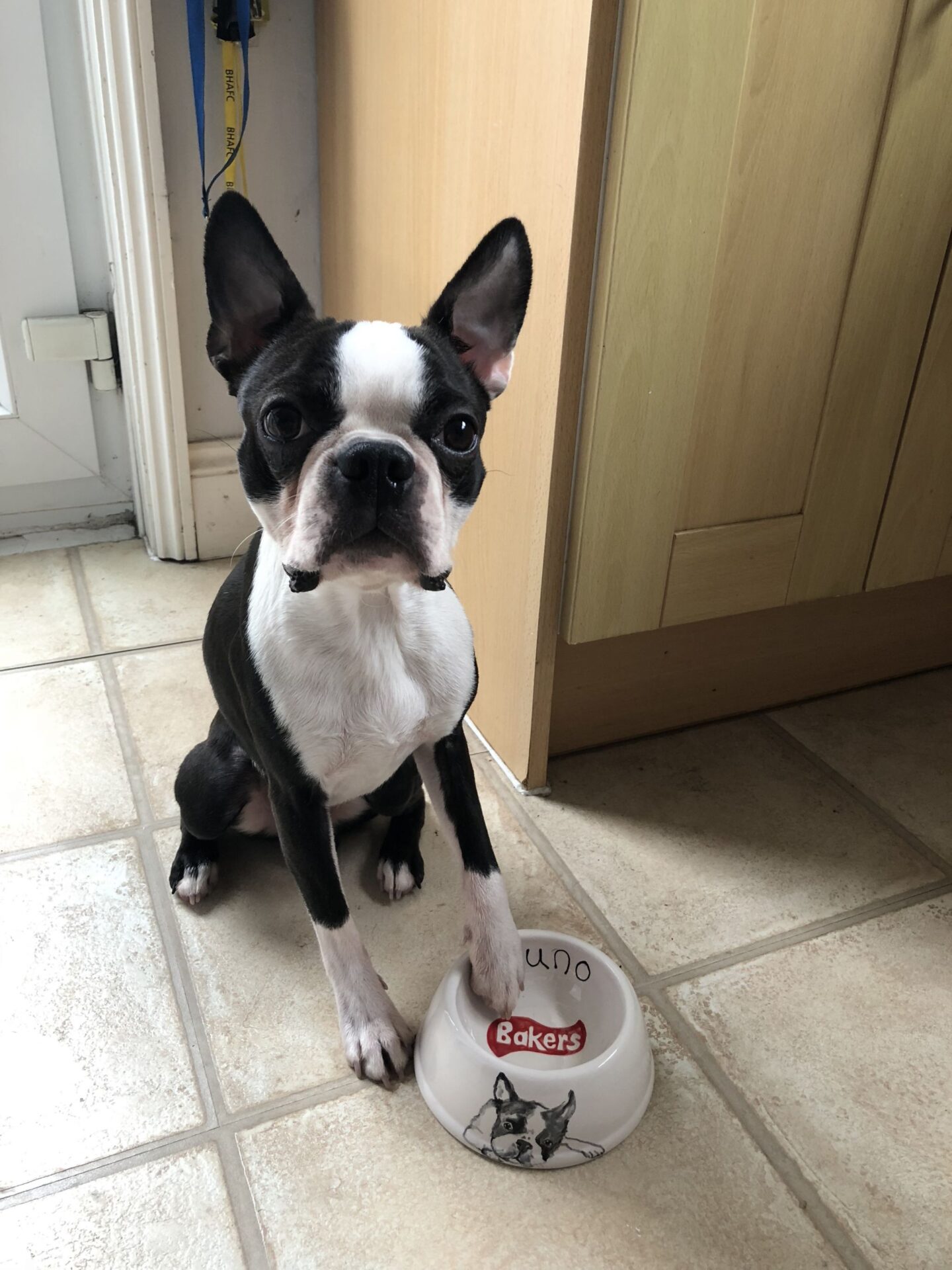 Are you surprised about the truth behind Bakers? I know I was!

Would you like to win some delicious Bakers treats for your Doggo? Enter below.