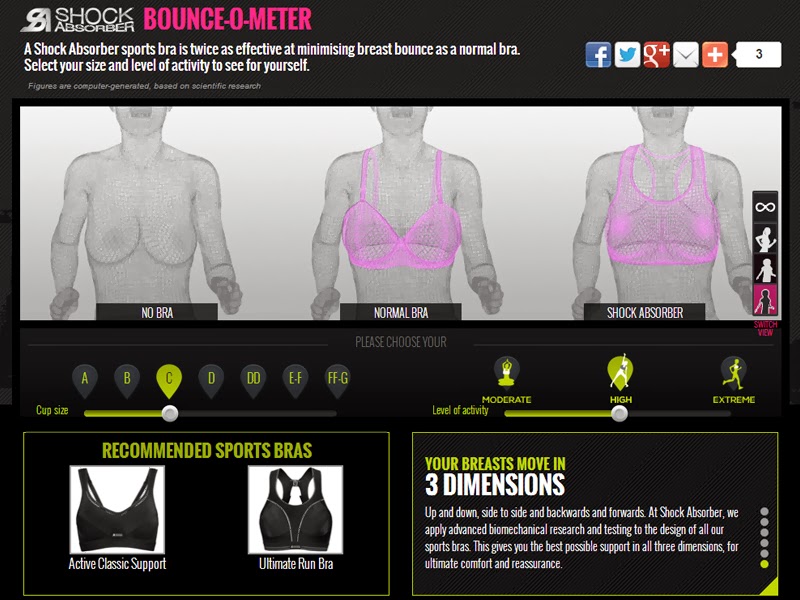 With challenging time constraints, tighter purse strings and the increasingly unpredictable British weather, it seems there are many reasons why women might avoid exercising. A new survey released today however shows that it is actually women’s breasts that are holding them back from doing the exercise they love so much.

The UK’s No. 1 sports bra brand Shock Absorber* spoke with 1,000 active women across the UK to uncover the barriers women face when exercising and participating in sport. The surprising results revealed more than one third (37%) find the battle with their breasts too much to bear, citing breast bounce and discomfort as the primary reason they avoid exercise.

Of the women surveyed, two thirds (65%) said they frequently experience breast bounce, and even the more determined gym-goers who persevere with exercise are still experiencing the knock on effects; with 35 per cent admitting they feel embarrassed, 22 per cent stating that it inhibits their enjoyment and a quarter admitting they don’t work out as hard as they potentially could.

To address this challenging issue, Shock Absorber is on a quest to combat bounce and has created a unique tool called the Bounce-o-Meter. A 3D visual demonstration of breast movement informed by scientific research and lab videos, the tool allows women to adjust the breast size and level of activity for a clear representation of the impact their chosen exercise may have on their breasts. Women can then easily find the best Shock Absorber bra for them to ensure they are supported at all times.

Dr Joanna Scurr, an expert in breast health at the University of Portsmouth commented: “Our research has shown that independent breast movement can cause pain, embarrassment, changes in performance and ultimately can deter women from exercising.  It also shows that exercising without appropriate breast support may lead to stretching of the supporting structures of the breast. I hope that this initiative will help raise women’s awareness of the importance of wearing a sports bra when exercising.”

With so many women battling with their breasts, it is perhaps surprising that a huge 35 per cent of active women surveyed admitted to never wearing a sports bra when exercising.

This lack of awareness was further confirmed by other revealing statistics from the survey:

·       Half of the women surveyed (49%) said they don’t believe a sports bra is necessary when doing yoga or pilates, with a further 20 per cent not wearing one for an exercise class at their gym (see appendix for full details)

Martina Alexander, Marketing Manager at Shock Absorber, commented: “These survey results make it immediately apparent that there is a real lack of understanding amongst exercising women when it comes to getting the right breast support. The Bounce-o-Meter is a step in the right direction to help educate women and demonstrate that wearing a Shock Absorber sports bra can reduce breast bounce and discomfort, allowing them to get the most out of their workout.”

With 67 per cent of women admitting they frequently see fellow exercisers’ breasts bouncing and wish they could tell them they need a sports bra, the Bounce-o-Meter is the perfect way to spread the message about combatting bounce.